If you haven't had the chance to purchase your copy of No Longer Broken yet, here is a portion of the first chapter for you to check out. Let us know what you think of this sample! 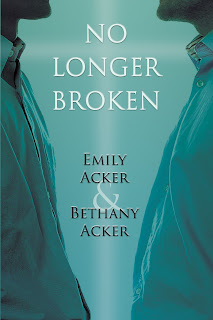 Chapter One
Isaiah Russo had tried hard over the years to pretend that everything was okay. He had tried to believe that eventually he and his wife would make it through their struggles and that everything would turn out alright, but he had been lying to himself. He could see that now.
Three weeks earlier, when he’d come home from his final tour overseas to find his wife in the arms of another man, he’d known that there was no hope for the two of them. There hadn’t been for a while, really, but he knew it with certainty then.
He’d filed for divorce two days later.
Isaiah had hoped for things to be different now that he was retired from the military, but he hadn’t hoped for things to change this drastically.
He and Catalina had been married for almost fifteen years—and for what? Their marriage had been a waste. All that it had done from the beginning was cause a whole lot of hurt.
Isaiah thought of Catalina’s children, and he knew that he had to do something that he should have done a long time ago. It was time that he put the past behind him and moved forward with his life.
He had learned a lot in the twenty years that he’d served in the military, and the most important thing that he had learned was to trust God with his life. He might have only asked Jesus into his heart a few months earlier, but that didn’t mean that his faith wasn’t real.
And he knew that he needed to put his newly-found faith into practice by doing what he should have done years earlier.
He had a lot of people to apologize to and a lot of wrongs to make right. He couldn’t possibly fix every wrong, but he was going to try.
He’d caused too much hurt and destruction. It was time to make amends. It was time to try to bring healing to the ones who he had hurt.
He just hoped that he’d be allowed the chance to do that.

Purchase the book to finish the first chapter and check out the rest of the story.
No Longer Broken is available on Amazon, Kindle, Nook and eLectio Publishing.