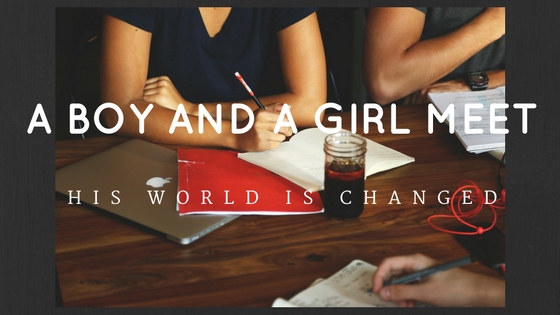 He walked through school with a backpack full of homework that was untouched. There never seemed to be enough time to get to it, never enough energy to use to finish it.

He made his way down the hallway and to the classroom of one of his favorite teachers. The woman spoke in a way that was exciting to listen to. She made learning fun. Or, she had. He found it hard to pay attention to her now. The talking that she did only made him feel tired.

He sat through the class without actually learning anything. It was too hard to learn when all that he wanted to do was sleep. He pushed up from his desk and started for the classroom door, nearly colliding with a thin figure as he stepped out into the hallway.

“Uh, sorry.” He reached out and caught the girl by grabbing onto her arm.

“It’s okay.” She smiled, her entire face lighting up as she looked over at him. “Hi!”

“Oh.” He kicked himself for the lame response. He needed to say something that would get her attention, that would make her keep talking. “Me, too.”
“You’re new?”

“It’s good to meet you, too.” The girl’s smile stayed in place. “Hey, I don’t have any friends here yet, would you want to hang out later?”

He offered the girl a smile. “Sure.”

They parted ways, and he found himself feeling something that he hadn’t felt in a long time. Excitement. He was looking forward to the time that he would get to spend with this girl. He was eager to know her better.

The world was changing for him. He knew now that he would be alright and that love would keep him moving.

Love. He smiled as he stepped into the classroom where he was supposed to be next. He had only just met the girl, and already he was in love.

Find part one of this story here and part two here.