A Boy and His Mom - Something Missing at Home - Part Two 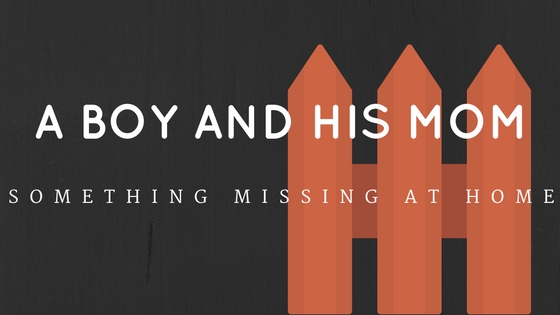 He spotted his mom’s sedan in the driveway as he walked down the sidewalk toward their house. He remembered her telling him that she was off that evening, that they would have an early dinner and hang out.

He slowed his steps. As much as he loved his mom, he would rather be alone than spend time pretending that everything was okay. He didn’t feel like talking with her and faking excitement in regard to school, sports, or movies.

“You’re home.” His mom looked over with a smile as soon as he stepped through their front door. She was seated on the couch with her feet up on the coffee table in front of her, and she patted the cushion beside her. “Come sit.”

He shifted his backpack on his shoulder. “I should get my homework done first.”

“Oh.” His mom frowned. He hated disappointing her. “Okay.”

He move across the room.

“We’ll watch a movie later,” his mom said. “I rented a good comedy. It’s not a chick flick at all. You’ll love it.”

“Okay.” He nodded before heading for his bedroom. He and his mom were the only ones living in the house, and the place was quiet.

He stepped into the large room that was all his own and stared over at the unmade bed. He felt like climbing in and going to sleep, but he had to at least attempt to take on his homework.

He plopped down onto the floor to avoid the temptation that the bed offered. Homework, then a movie with his mom. He would sleep later. He would attempt to sleep later. Sleep hadn’t been coming too easily as of late.

He heard dishes clattering in the kitchen, and he knew that his mom was making dinner. She was probably cooking one of his favorite foods, something that he had loved when he was younger. She was always trying to please him, always trying to make him happy.

He opened his algebra book and stared down at the page. It was all too deep, too hard to understand. He didn’t want to look at the study guide and try to figure out what he was supposed to do with the problem. It wasn’t like algebra was going to get him anywhere in life. It wasn’t going to solve any of his real problems.

He closed the book and leaned back against the wall. Maybe he would feel better if he just closed his eyes for a few minutes. He would rest for a little bit and then he would get up and work on his homework.

He rested, and it seemed like just seconds later that he heard his mom calling out his name. She knocked on his bedroom door. “Are you done with your homework yet? I put parmesan on the garlic bread, just the way that you like it.”

He pushed up from the floor. Forget the homework. He rubbed at his eyes as he stepped over to the door. It was time to pretend that he was actually hungry and that the spaghetti meal that his mom had made was appetizing to him.

Find part one of this story here and part three here!

Written by Emily Acker
Posted by Emily at 9:15 AM