Alone in a Crowd - A Boy Living in Pain - Part One

Tried creating a new kind of story. This fits with No Longer Broken in a way - those who have read the book will probably understand that - but it is also written in a different style and it shares a different kind of story. Hope you enjoy.
-Emily 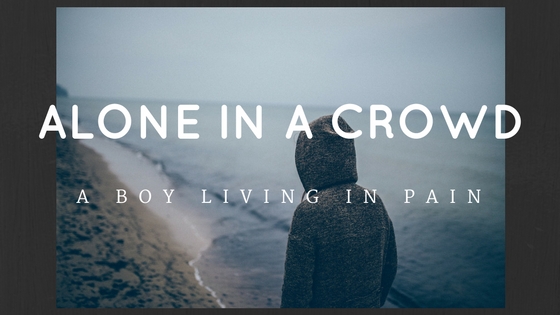 He moved through the hallways with his gaze on the floor. There was talking all around him, voices that didn’t quite make sense. He couldn’t pay attention to them. All of his focus was on the books in his hands and the class that he was headed to. The last class of the day.

He brushed past a group of giggling girls. They were so happy. Their biggest worry was the lipstick one of them had managed to smudge on her tooth. They didn’t know what pain felt like.

He stepped into the large room that was going to fill up quickly, making his way toward the back of the space. He lowered himself behind a desk, setting his health textbook in front of himself.

The teacher moved into the room, her gaze traveling around the space but never really landing on him. She seemed to see through him, as everyone did.

He shifted on his seat and tried to focus on what was being taught. His mom expected him to pay attention in school, and he didn’t want to let her down. He was all that she had, and he was hoping to make her proud.

“For your homework,” the teacher spoke to the class as she finished up with her lecture. “I want each of you to look into your past. Consider your family history. See what it is that makes you, you.”

He frowned. How was he going to accomplish that? How would he find the energy that he needed to do something that required so much thought?

He pushed up from his seat as they were released to go home. His final class of the day was finished and he was now free.

“You going to the party?” A voice stopped him.

He turned toward the one who had spoken, ready to respond, then saw that the kid was focused on someone else. The question was not for him.

He moved out of the room and down the school hallway. He stashed his books in his locker and looked toward the school’s exit. He was about to be free. The outside world was calling him.

“Hey!” He heard a voice behind him and turned to find a boy from his biology class following after him.

“Do you have a partner for our project next week?”

He shook his head. He didn’t remember being told that they needed a partner. He hadn’t paid much attention in class earlier that afternoon. It was hard to pay attention when he really didn’t care about what the teacher was saying.

“Everyone else has already found a partner,” the boy said, giving a shrug. “I guess we’re stuck working on things together.”

“Okay.” He turned away from the other teen and headed for the exit again. So, he had the partner that he needed. Great. It wasn’t like he was concerned about that. Homework wasn’t a big deal.

Maybe he wasn’t completely invisible. Not when someone needed his help. If there had been someone else around to partner with the other boy, then he never would have been picked to help him out.

He stepped out of his high school and made his way down the stairs. No one would care if he was gone. No one would miss him, and he sure wouldn’t miss any of this.

Get your copy of No Longer Broken on Amazon, BN.com, or here!

Labels: a boy living in pain, alone in a crowd, hurt, lost, pain, Part one, story