A Boy Without Hope - A Life-Ending Decision - Part Five 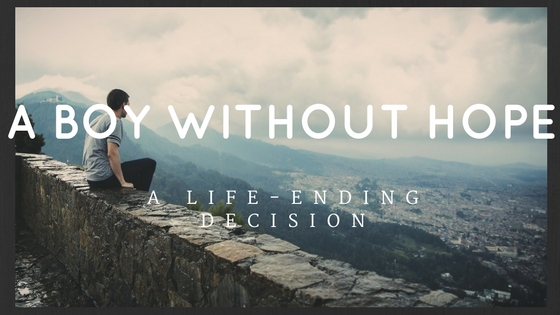 He thought of his girl as he walked down the street, but thoughts of her only brought him more pain. She was perfect and everything that he could ever want, but she wasn’t enough. The girl that he loved was not enough for him.

The time that he had been spending with his girl had brought the two of them closer than he had ever been with any girl. He had done things with her that he had never done before. Still, she wasn’t enough. Nothing was enough.

He kicked at a stone on the sidewalk and sent it shooting off in front of him. There were some people who seemed to have life figured out and who were happy no matter what. He had never been one of those people.

He frowned. It was crazy that it had come to this. Despite all that had come about for him recently, a beautiful girl falling into his lap, someone actually choosing to be his partner in a project - even if that choice had been forced on the guy - it wasn’t enough. Nothing was ever enough.

In his hand, he held a bag. He clutched the paper handle as tight as he could. That bag held all that he needed now. That bag would take him away from here, away from a life that was never good enough.

Everything is about to change. It’s all going to end. He stepped into the cemetery, the place he had chosen as his spot to do the deed. He walked through the gravestones, wondering at the lives that had been lived by these individuals. What had caused them to die, and had they longed to live a little longer? If he could give them his life, he would. If they simply wanted to live a little longer and he could help them with that, he would.

Pulling a bottle from the bag he had carried with him, he sank down onto the ground. He had a mix of supplies in the bag, not sure what it would all take to do the job.

He twisted the cap on the bottle, ready to escape the emptiness, the pain. He was done with it all. He didn’t want to face anything anymore.

His eyes stung as he thought about his mom, his girl, his school. Everyone would be better off without him. They wouldn’t miss him. It wasn’t like he was breaking any hearts. No one needed him.

“They won’t even know I’m gone,” he whispered into the night. “No one will care.”

Check out part one here: http://ackerandacker.blogspot.com/2016/09/alone-in-crowd-boy-living-in-pain-part.html
Posted by Emily at 8:32 AM