Pain that Lasts - A Girl Trying to Move On - Part Seven 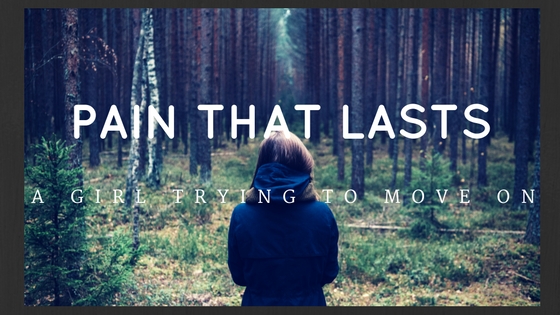 She rolled onto her side. She had never felt the kind of betrayal that she felt now. He had left her and she would never be the same.

What did I do wrong? Did I fail him in some way? She felt tears fall down her face and she ignored them. They had been falling off and on since she got the news. I must have done something wrong, otherwise he wouldn’t have chosen to leave.

A quiet knock came at her bedroom door, and she sat up on her bed as her dad moved into the room. He had concern written on his face as he approached her. “Sweetie…” He reached out and wiped her tears with his thumb.

“I don’t know, sweetie. I don’t know.” Her dad held her close, his hand running up and down her back. “If I could take your pain…”

“I don’t know what made him make the decision that he did, sweetie,” her dad said softly. “But I do know that he messed up. He had a beautiful girl like you loving him, and he chose to leave that behind.”

“He chose to die,” she whispered. “Why would he choose to die? Did he know that it would hurt me like it does? Did he know, and he still did it?”

“Sweetie, I don’t think he was thinking about you when he made his decision,” her dad said. “He needed help, and he didn’t get that.”

By Emily Acker, author of No Longer Broken

Scroll through the blog to find the earlier parts of the story, or find Part One of the story here and work your way through it from the beginning.