Standing Up to Help - Ready to Change the World - Part Eight 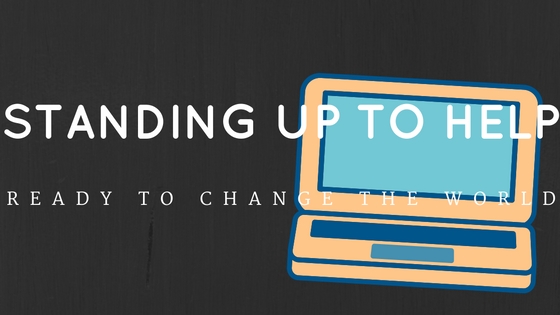 She drew in a deep breath and looked out at the crowd before her. She felt her knees shake as she realized just where she was and just what she was about to do. These were her classmates, students who had been by her side as she worked through homework problems and took exams. These people were a part of her life each day. How could she stand up in front of them and share her heart?

How could she not? These were the exact people who needed to hear the message that she had to share. It was teens like the ones in front of her that she wanted to talk to, that she wanted to help.
After her own school, there would be other schools that she would speak in front of, other groups of students who would hear her message.

She watched as a girl in the front row of the audience fidgeted on her seat, the girl next to her obviously playing a game on her phone. These teens didn’t want to sit through a lecture. They didn’t want to hear another speech. These kids would rather be anywhere but in the seats that they were in.
She sighed. Somehow she was going to have to make her message something that others would listen to and that they would think about. She needed to find a way to touch the hearts of those who were listening to her today.

She turned her gaze to the woman sitting at the side of the crowd. That woman stood with her completely and understood all that she was about to share. That woman knew the pain that suicide could bring. She had lost her son.

Turning her gaze away from her boyfriend’s mom, she took in another deep breath. She said a quick and silent prayer. It was time to get started.

She cleared her throat then looked out at the crowd, meeting the gaze of one student, then the next. “Suicide is not the answer, and it will never be the answer. Suicide does more damage than those who choose it will ever know. The pain that is left behind after a suicide is pain that does not go away. It might fade, but it does not disappear.”

By Emily Acker, Co-Author of No Longer Broken

Check out part one here!